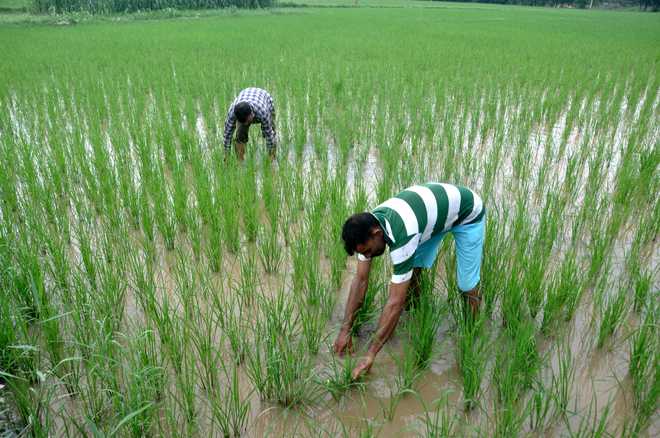 Ahead of the BJP’s kisan rally in Uttar Pradesh, state Agriculture Minister Surya Pratap Shahi today lauded the Centre’s decision to increase the MSP of kharif crops, saying this would raise farmers’ incomes.
“Ever since its formation, the NDA government has been working for the welfare of farmers and a number of steps have been taken to reduce the damage incurred to them,” he said.
He said the latest pro-farmer step is fixing the minimum support price (MSP) of kharif crops equivalent to 1.5-times the input cost for these crops. This will increase the farmers’ incomes which had stagnated in the past few years, he added.
In the last three years, the Centre has increased the MSP of rabi crops, kharif crops and pulses, he said, adding that this was a record increase since Independence.
On opposition parties terming it as “insufficient” and “cheating farmers”, Shahi said, “They ruled the country for more than 50 years, but never took any step in interest of the farmers. In the 10 years of the UPA rule, they never initiated any concrete step for the farmers. Even the SP and the BSP were with them. The RJD and the RLD were also with the government then. Despite having scope, they chose not to work (for farmers).”
He said after the BJP formed government in Uttar Pradesh under Chief Minister Yogi Adityanath, there was a record purchase of wheat and paddy. The sugarcane dues of farmers which were pending during the previous SP government were paid.
Through Prime Minister Narendra Modi’s kisan rally at Shahjahanpur tomorrow, a message will be disseminated to the farmers about the various welfare measures for the farmers initiated by the Centre and the state government, the agriculture minister said.
Refuting the claims made by some opposition parties that the BJP was nervous ahead of the 2019 Lok Sabha polls, and hence the Prime Minister was making frequent trips to Uttar Pradesh, he said, “Is there any problem if the prime minister comes to lay foundation of development projects? And those who are objecting to his visit represent an anti-development mind set, hence they are levelling such baseless allegations.”