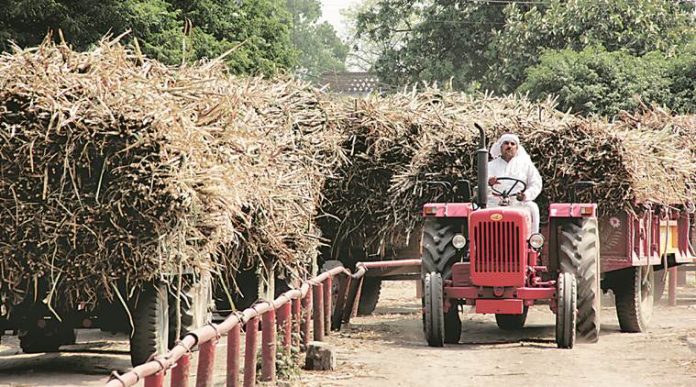 With crushing of cane for the 2018-19 sugar season (October-September) set to begin in just over a month, the BJP government in Uttar Pradesh is set to approve a Rs 5,535-crore package to help mills clear their outstanding payment dues to growers, which are now almost at Rs 10,000 crore.

The Rs 5,535-crore amount would include Rs 1,010 crore to be disbursed to 24 cooperative factories and Rs 25 crore to the sole state corporation-owned mill. The balance Rs 4,500 crore will be given to private sugar mills — Rs 500 crore as grant and Rs 4,000 crore in the form of soft loans.

“The entire money is going to be used for clearing cane arrears of farmers for the current (2017-18) season. We have already made budgetary provision towards this through a supplementary demand for grants last month. The state cabinet will formally approve the package in the coming week,” Suresh Rana, UP’s Minister of Sugar Industry and Cane Development, told The Indian Express.

The minister stated that the Rs 500-crore grant to private mills would go towards making cane payment to farmers at the rate of Rs 4.50 per quintal. “The interest rate to be charged on the Rs 4,000-crore soft loan and the various conditions for availing it will be decided at the cabinet meeting,” he added.

“The package will allow us to immediately clear the dues of cooperatives and the corporation-owned mills. We are hopeful of clearing the private mills’ portion, too, before the beginning of the next season,” said Rana.

Denying allegations of the government’s indifference to the plight of cane growers – seen widely to have contributed to the ruling party’s loss in the crucial Kairana Lok Sabha bypoll in May – the minister pointed out that “never in the state’s history have mills crushed 111 crore quintals and made payments of nearly Rs 25,550 crore, which will eventually touch Rs 35,500 crore, in a single season”.

While the minister was confident that crushing for the coming season will take off from around October 20, the industry, however, expressed doubts. “With sugar prices so low and banks hesitant to advance working capital, how are we going to start the season?” a miller asked. As regards clearing of the current season’s cane arrears, he said that “even if the state government were to extend soft loans for the purpose, from where are we going to generate money to repay these?”

Private mills, significantly, did not take part in the cane area survey meetings conducted by the state government during July-August to assess the size of the crop. Nor have they indicated their cane demand for the new season, which is supposed to take place by August-end. And they are also not participating in the meetings where cane area is individually assigned (“reserved”) to mills.

“What is the point, when we are in no position to crush in the first place?” said the miller.