Home All News Weather Forecast for October 6 Across India 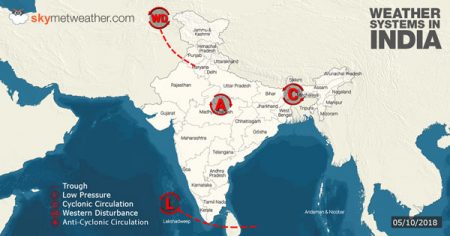 Weather Systems across the Country

A Western Disturbance continues to persist over North Pakistan and adjoining areas. A trough is running from this system to Haryana across Central Pakistan and South Punjab.

A Cyclonic Circulation is seen in lower levels over North Bangladesh and adjoining West Bengal.

A Low- pressure is over Southeast Arabian Sea. A trough is extending from this system till Southwest Bay of Bengal.

An Anti-cyclone is over Madhya Pradesh.

In the last 24 hours, moderate rains with heavy to very heavy spells occurred over Kerala and Tamil Nadu.

Weather of West Rajasthan and parts of Kutch remained very hot with maximums settling around 40 degree- Celsius or more.

In the next 24 hours, light to moderate rains with few heavy spells will occur over Tamil Nadu, Kerala, South Karnataka and Lakshadweep.

Isolated thunder activity is possible over some parts of North Rajasthan and parts of Haryana.

No relief from the ongoing weather conditions can be seen over West Rajasthan and parts of Kutch. Places like Uttar Pradesh, Haryana, Madhya Pradesh and rest Gujarat will experience maximums in higher 30s.