Energy becomes front page news
Winter is coming (in the Northern Hemisphere, that is). Natural gas prices everywhere except the Americas have gone completely nuts; countries in Europe and Asia don’t have enough gas stored to endure a cold winter. For example, UK natural gas futures have increased by 5,000% bottom to top since May 2020.

For context, raw sugar futures have merely increased by 125%.

China has been taking aggressive action: It’s rationed electricity to heavy industry in several provinces. It’s told state owned enterprises to do “whatever it takes” to secure fuel supplies, including resuming Australian coal imports. It’s been aggressively buying liquified natural gas (LNG) spot cargoes. European nations have also been scrambling for supply, but the tight market for LNG has made this tricky. European gas prices are therefore strengthening quickly to try to reduce gas demand. Retail prices for gas are usually capped (leaving people to freeze in winter isn’t generally a vote-winner) so this means heavy industry somewhere will need to shut down. Earlier this month, two fertiliser plants in the UK stopped operations until the UK government.

Energy drives inflation
Gas prices have now advanced so far that some seriously weird things are going on. It appears that the UK debt market is now responding to the latest gas price headlines: perhaps a sign that fixed income traders are worried that energy prices are becoming inflationary and may affect interest rate policy. 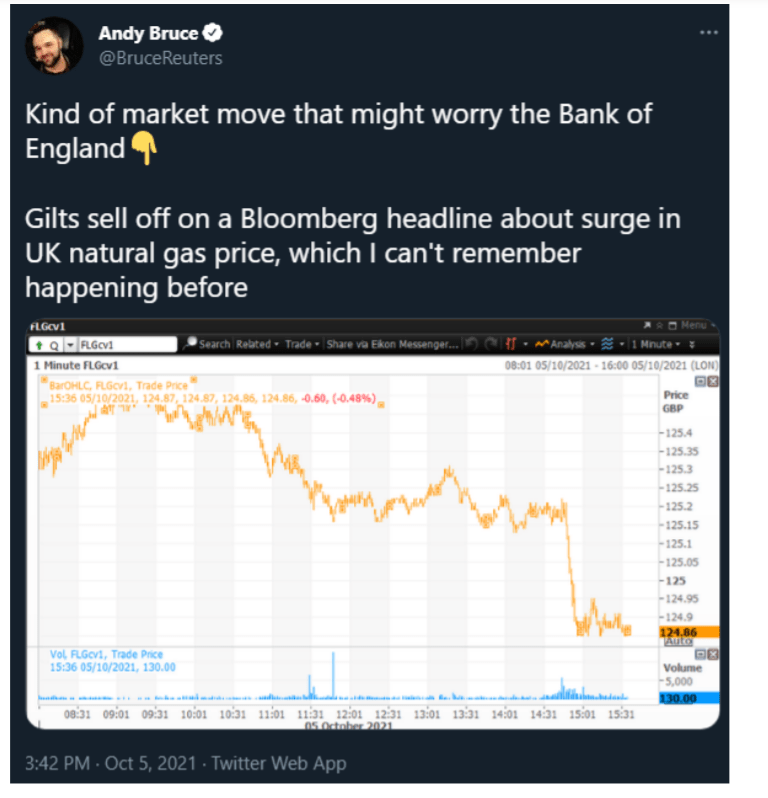 We can’t recall a previous event where natural gas has influenced the bond market; the tail is wagging the elephant. This suggests commodity inflation is about to become a major political issue again. Even in the USA, which isn’t facing a natural gas crunch, the strength in the crude oil market has trickled through to gasoline, which the US Federal Reserve watches keenly as an inflation indicator.

What About Other Commodities?
As a result of all of this, the Bloomberg Commodity Spot Index has strengthened to record highs this week, dragged higher by energy. But many people seem to be forgetting that other commodities are faring less well. For example, the corn market initially rallied on concerns that fertiliser shortages would lead to lower yields around the world, but this rally seems to have faded.

For sugar cane, fertiliser typically accounts for around 10% of overall cane costs and there’s a risk we see reduced fertiliser application in some key countries; we are investigating further. Perhaps the biggest impact for non-energy commodities comes through the US Dollar, which has quietly been strengthening in recent weeks. 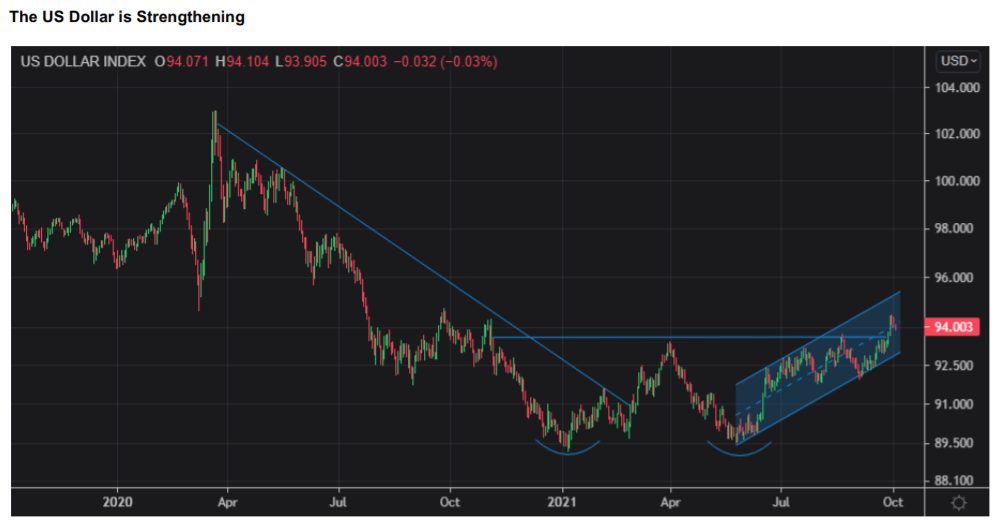 Will the USA Default in Q4’21?
Please also be aware of the ongoing US Debt Ceiling negotiations. I accept this is tedious; Congress must agree to raise the amount the US government can borrow before this level is exceeded. This has happened more than 100 times before and is usually resolved in a bipartisan manner. But American politics have become increasingly polarised; Republicans are using the debt ceiling as leverage to try to push back against President Biden’s spending plans. The problem was due to come to a head in mid-October but now looks to have been pushed back by a month due to a short term fix agreed between Republicans and Democrats on the 6th October. This means we must endure another month of political negotiations and potentially a missed US debt payment in November. A US default could lead to more US Dollar strength. This is counter-intuitive; normally, when countries default, their currencies weaken as investors flee. But the USA is different: everyone knows the USA can pay its debts, and it’s backstopped by having the world’s reserve currency and most powerful military. The default would therefore be ‘technical’ rather than real and would probably lead to increased risk aversion in the markets, which means more investors seeking US Dollars and perhaps gold.

The Impact on Sugar
We think the rising US Dollar could be negative for sugar prices. Sugar doesn’t have the same strong fundamental story that the energy market does; there’s plenty of raw sugar in Centre-South Brazil today, and Northern Hemisphere cane crops are about to start; consumption growth is sluggish. Meanwhile, speculators have held a sizeable long in sugar for a year; this position is starting to feel stale.

Perhaps it’s time to knock everyone’s complacency: that of politicians who’ve ignored the energy crisis, and of speculators who’ve spent too much time looking at the energy crisis but not enough time thinking about shifts occurring in other markets?