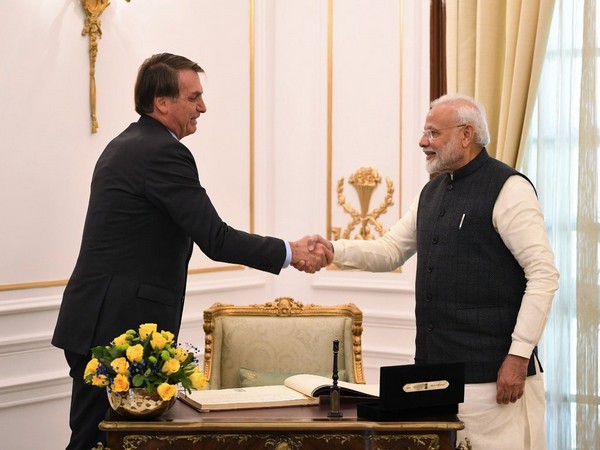 Brasilia, July 8 (ANI): After Prime Minister Narendra Modi wished him a speedy recovery from coronavirus infection, Brazil President Jair Bolsonaro on Wednesday said he will soon be fully recovered to continue working on strengthening the friendship and cooperation between Brazil and India.

“Thank you very much for your votes, dear Prime Minister Narendra Modi. God willing, I will soon be fully recovered to continue working on strengthening the bonds of friendship and cooperation between Brazil and India,” Brazil President Bolsonaro, who has tested positive for coronavirus, tweeted.

Earlier in the day, Prime Minister Modi tweeted best wishes for Brazil President and also posted the same message in Portuguese, the official language of Brazil.

“My friend President @jairbolsonaro, my prayers and best wishes for your speedy recovery,” the Prime Minister said in a tweet.

Following months of downplaying the severity of the virus and calling it to be a “little flu”, Bolsonaro himself announced he has contracted the infection on Brazilian TV channels on Tuesday.

“Everyone knew that it would reach a considerable part of the population sooner or later. It was positive for me,” he said, referring to the COVID-19 test he took on Monday.

Bolsonaro has previously tested negative for coronavirus in at least three separate examinations.

Those tests were administered between March 12 and March 17, after Bolsonaro returned from a bilateral meeting with US President Donald Trump in Florida and many in his entourage tested positive. (ANI)