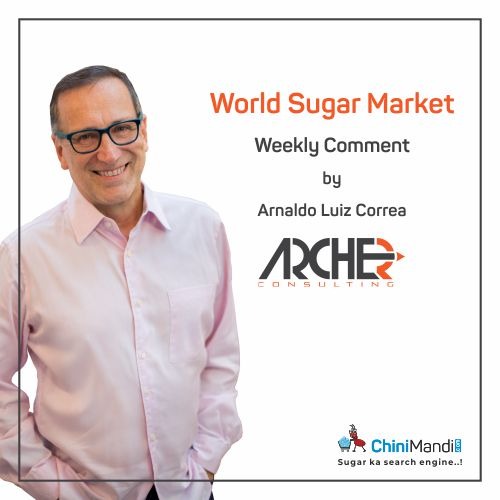 
Most commodities closed out the week on a high trend together with the sugar futures market, whose contract expiring in July/2021 closed at 17.36 cents per pound. The 70-point high over the week (more than 15 dollars per ton) can be explained by the combination of various ingredients: macro scenario, the real appreciation against the dollar (2.60% over the week) bringing hydrous close to the parity with sugar (just 50 points of discount against NY), and the water deficit, which is devastating the sugarcane regions in Brazil.

As for the water deficit, five Brazilian states are under water emergency alert, a situation the authorities classify as “severe”. Since 1910, when the country started collecting weather data, this is the first time this type of alert has been triggered. The coffee quotation in NY has reached the highest point since November, 2016. Rain forecast is still discouraging.

Even with a bull market, the appreciation of the real has flattened the sugar price curve in real per ton for the 2022/2023 and 2023/2024 crops. The average prices have fallen by about R$20 per ton over the week. We strengthen our strategy to fix prices in real per ton for the mentioned crops and at the same time to buy out-of-money calls at the exercise price 200 points above the market level.

The non-index funds have reduced their long positions by 16,000 lots over the week (Tuesday to Thursday) according to COT (Commitment of Trades), released by the CFTC (Commodity Futures Trading Commission). Throughout the period, the market dropped 17 points only. NOTE: the funds sold 16,000 lots and the market dropped only 17 points!!!  This might imply that the market support is temporarily at the 17-cent-per-pound level. To be seen.

Hydrous average price in May is the greatest nominal value in this century. It’s not, however, the highest value in dollars. The record belongs to March/2011, when hydrous was traded at US$0.9822 per tax-free ex-mill liter.

It’s interesting to see that May closed out at a monthly average of 17.21 cents per pound (100 points above what our model predicted), the greatest monthly average of the year, a fact has never occurred since 2000, because usually the April/May/June/July period is when the lowest average prices of the year occur. Now, the greatest average prices of the year concentrate on December, January and February. That is, we are in a pretty unprecedented situation.

On their site, MB Associates predict the dollar for late 2021 at R$5.6000 and R$5.8000 for late 2022. Our recommendation is to closely monitor the dollar exposure. We will still have a lot of bumps due to the sanitary crisis and its repercussions on the economy and political environment. Don’t fall in love with your position.

What we can assume from the confusing picture before us is that the appetite of the funds might be running out; the strengthening of the real, though temporary, will hold back the sugar quotations; 16-17 cents can consolidate as a price support over the medium term. If there is a resurgence of the pandemic, the real will certainly drop again, but the visible acceleration in the major economies (except for Brazil) should make oil prices appreciate and – if the parity with the international price is kept – gas will go up here. Cost inflation is deeply worrisome, the IGPM – General Market Price Index is soaring and the mills are (re)calculating their costs fearing the increase in inputs.

As we can see, it is a market affected by intertwined or independent fragments that make the decision-making process stressful.

The participation of Itau BBA in the creation of a trading company dedicated to the agricultural sector in Brazil shows that the institution is paying attention to the opportunities that are obvious for those who have been following the market for several years.

The number of trading companies that trade commodities in Brazil, be them Brazilian or foreign companies, and that have vanished over the last 20 years is alarming (at least more than 50 according to my calculation). At the root of this disappearance was the cash-flow instability, the risk of the counterparts, mismanagement and weak knowledge about derivatives market. There is sustainable margin in commodities and Itau BBA must have noticed that. The European and American banks that used to greatly finance the industry in the 1980’s and 1990’s were incapable of adapting to a market with smaller margins and took unacceptable risks which resulted in major losses that pulverized the participation of the banks in the sector. That’s great news for the sector. If the institution is successful, others should follow suit.

The market needs creative companies, bringing solutions to the producers and other participants in the extensive chain of the agribusiness. BASF, worldly leading company in the chemical industry, has made a first exchange operation of agricultural inputs by carbon credits (CBios) with a grain and agricultural input company in Rio Grande do Sul. This business mode can open up a wide market for the sugar mills.

Brazil is coming close to 500,000 deaths by Covid-19 and health specialists call attention to the fact that most probably we will have a third wave much more lethal than the two first ones. If this really happens and is followed by another period of lockdown and isolation, the economy will feel the hard blow.

We find ourselves in this macabre situation because the country is ruled by an unstable person, with serious cognitive problems who out of whim, vain, lack of empathy, disproportionate hunger for power, or whatever psychological problem it is, passed up on the purchase of 56 million doses in October last year. If we had started vaccinating earlier, tens of thousands of lives would have been saved. And what does the ignorant dweller of the Executive office do? He continues with his madness, prescribing magical potions to cure the disease, adamantly denying science, giving the finger to the mourning families and celebrating death when he encourages gatherings with his unmasked followers in a true apotheosis to scorn and barbarism. When we thought we had gotten rid of hell once we sent away the criminal organization that was in power in the 2018 elections, we actually just changed rooms.

You all have a good weekend !

ChiniMandi - Saturday, 12 June 2021
Union Finance Minister Nirmala Sitharaman said on Saturday that recommendations of Group of Ministers (GoM) set up to look into tax relief on Covid-19 medical supplies have been accepted by the GST Council.

Vivek Waghmode - Saturday, 12 June 2021
Murari Mohan Jha met Industry Minister Shahnawaz Hussain and urged him to revive the closed Raiyam sugar mill from his constituency. He met the minister and discussed the issues related to the revival of the sugar mill.