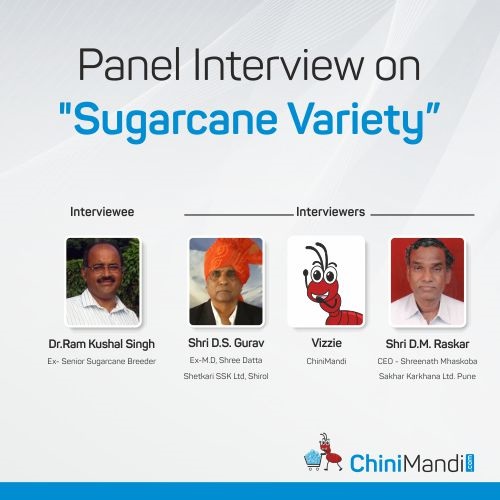 Improving sugarcane production will help in the prosperity of the farmers and other stakeholders associated with the sugarcane cultivation. Currently, the prime concern of cane growers and the sugar industry is to achieve higher sugarcane productivity and higher sugar recovery, both of which support maximum economic returns. The wider spatial and temporal variations in soil characteristics are the major constraint for achieving the maximum cane productivity.

An interesting panel interview with veterans from the Indian Sugar Industry took place on ChiniMandi where deliberation various approaches such as the development of high yielding and high sugar varieties, development of sugarcane based cropping system, production technologies including soil and water management, economically viable production and protection technologies.

Interviewee:
Dr.Ram Kushal Singh – Ex- Senior Sugarcane Breeder.
Developed 07 sugarcane varieties including 03 early maturing high sugar varieties viz. CoS 08272, CoS 96268, CoS 95255, CoS 08272 is being popular among the growers and sugar industries in sub tropical climate. Published 204 research articles including 83 in Referred Journals.

Q. What inspired you in developing sugarcane variety?
A: I started my career in 1989 as Sugarcane Breeder at Sugarcane Research Institute, Shahjahanpur (U.P.). During this period, CoJ 64 was popular among the sugar Industries as well in growers of U.P.,Haryana and Punjab, due to its late losting nature regarding high
sugar recovery. I had inspired with the late losing quality of CoJ 64,then ruling variety of North India.

Q.How did you come to this field?
A: Being a breeder, my goal was to develop such early maturing high sugar varieties having high tonnage with multiple resistance against diseases and pests along with good ratooning and sustain up to the April in north Indian conditions,so that sugar industries as well
growers could be benefited with sustainable sugar and sugarcane productivity.

Q.You have developed 07 varieties of sugarcane, what was the focus while this development?
A: Since,my joining in sugarcane breeding, I had focused to develop a concept of seedling selection under space transplanting conditions for picking high sugar genotypes in early generation which had accepted by all the breeders and followed till now in most of
sugarcane research organization. As a concentrated effort, developed a concept of selection during early phase of growth for developing early maturing high sugar variety of sugarcane. As a result the work on breeding for early maturing varieties had started by me in U.P. Council of Sugarcane Research. Resulting able to developed seven sugarcane varieties including four early maturing high sugar varieties viz. CoS 08272, CoS 96268,CoS 96260, CoS 95255 and three high sugar varieties; CoS 97261,CoS 88216,CoS 91269. Among these CoS 08272 is being popular among the growers and sugar Industries in sub tropical
climate.

Q.Which are the most popular variety ever developed & what made it so popular?
A: CoS 08272-An early maturing high yielding rich sugar variety having multiple resistance against diseases and pests. CoS 08272 is a rare combination of four desirable attributes i.e. early maturity, red-rot resistance, high cane yield and good ratooning ability. It is a farmers
and factory’s loving variety due to its excellent industrial quality viz; early maturity, sustainable rich sugar recovery, higher cane and ratoon yielding ability with moderately resistant to red rot and resistant to smut, pokka boeing and others diseases. The genotype has impressive, good field stand, profuse and synchronize tillering, erectness, solid, vigorous growth, dark lush green foliage most suitable for fodder, tall canes with non lodging tendency.

Q.Nowadays, the sugarcane crop is blamed as a high water consuming crop, what is your scientific opinion?
A: Integrated management of water is the need of the day, specially for sugarcane crop. Drip irrigation or light irrigation in alternate rows after 20-30 days intervals(deficit moisture conditions) could be adopted to save water for the future.

Q. Researchers from Uttar Pradesh have researched well on sugarcane variety, are they disease resistant? And can they be implemented apart from Uttar Pradesh?
A: U.P. Council of Sugarcane Research has given priority to develop high sugar varieties having moderately resistant against devastating red rot disease. As a result, linkage among early maturity, thickness, high sugar content, multi ratooning and susceptibility against red rot disease could be broken and with the result variety CoS 08272 could be developed which is high sugared and moderately resistant to red rot. It has also been appreciated by sugarcane industries, growers and researchers from different parts of the country.

Q. How many ratoons does the sugarcane variety developed by you produce in percentage wise and how will it grow in the future?
A: Three ratoon crop of CoS 08272 could be harvested with 400-500 Qt per acre or 100-125 t/ha under subtropical conditions. It is due to its profused and synchronized tillering even in winter harvested cane with less mortality.

Q.What would your piece of advice for farmers be?
A: Farmers should grow early maturing high sugar and red rot tolerant varieties like CoS 08272 with moderate fiber content having 2- 3 ratooning ability, so that tolerance could be developed against abiotic and biotic stresses viz; tolerant to diseases and pests, water stress, salinity and alkalinity..Crop rotation with green manuring, vermicompost, compost and bioagents like Trichoderma, Pseudomonas etc should be adopted regularly to enrich organic content of soil.