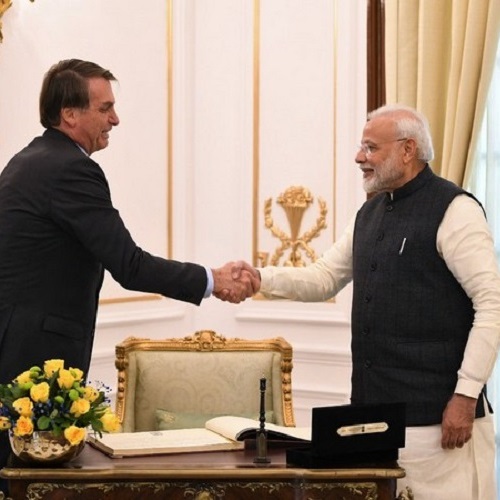 Brazil is the largest producer and exporter of sugar in the world and is a major competitor of India in the international sugar market. In February 2019, Brazil had dragged India into the World Trade Organisation’s (WTO) dispute settlement mechanism alleging that New Delhi’s sugar subsidies to farmers are inconsistent with global trade rules.

Brazil claimed that the domestic support measures extended by India appeared to be inconsistent with the Articles 3.2, 6.3 and 7.2 (b) of the Agreement on Agriculture.
Brazil was later joined in the process by several other countries including Australia and Guatemala.

The South American country further alleged that in recent years, India has massively increased the level of domestic support under its support regime for sugarcane and sugar.

Meanwhile, Prime Minister and Brazilian President Bolsonaro focused on expanding cooperation in the defence sector as well as energy, healthcare, technology, and agriculture.

“Today’s meeting with President @jairbolsonaro is our third in the last eight months. This reflects the topmost priority we accord to further expanding India-Brazil ties. It is gladdening that President Bolsonaro has graced our Republic Day celebrations as the Chief Guest,” the prime minister said in a tweet.

The Brazilian president is in town as a chief guest during India’s 71st Republic Day celebration.