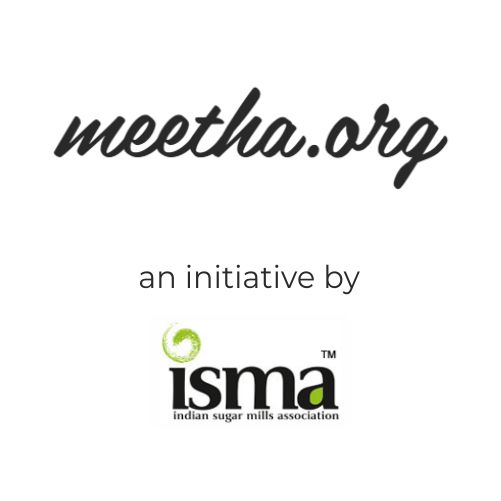 Sugar to India is as ancient as Yoga and Ayurveda itself. It firmly occupies the position of being one of the “panchamrits” or nectars of life.

The simple, irrefutable fact is that “Sugar has always been and continues to be an important part of our diet”. Sweetness is one of the five “basic tastes” detected by our sensory receptors in the oral cavity. Sugar is the most preferred source of the body’s fuel for brain power, muscle energy and every natural process that goes into proper functioning of our body cells.

With only 15 calories per teaspoon, sugar is similar to any other 15 calories, which may come from any other food item. Our body doesn’t differentiate the source from where the calories come from; it just sees and recognizes them as calories. All that gets converted to positive energy, so much essential for the proper functioning of a healthy body and mind. But, if the calories are not burnt adequately or too many calories are consumed, only then that will add to body weight. Like all carbohydrates, the body converts sugar into fuel quickly, unlike say fats, which on the other hand, are stored in fat cells to be used later.

These days there is a lot of negative propaganda against sugar. Much baseless and unsubstantiated information is floating around about sugar. There is absolutely no scientific evidence or any research paper which concludes or establishes that consumption of sugar in itself leads to any particular disease, even like diabetes or dental caries. They do say that problems in the body come about only if a person is obese, which in turn can be caused by the consumption of too many calories and lack of physical activities/exercise. It is reiterated that the calories can come from any food and not only from sugar alone.

ISMA feels that before the negative, unsubstantiated propaganda wrongly influences the consumers and misleads them, there is a need to counter such unfounded negativity and convey the right information to the consumers about sugar, and its impact on our body and health.

Accordingly, ISMA decided to start a campaign, including on social media, to educate and spread the awareness amongst the consumers on healthy eating and healthy lifestyle, as also debunk the myths surrounding sugar.

India is still a developing nation where a large population especially the poor consume sugar as an inexpensive and immediate source of energy. They can’t and should not be deprived of their sugar, because of some unfounded and misleading campaigns against it.

The per capita sugar consumption in India of only 19 kilos per person per year, is much lower than the world average of 23 kilos. The developed countries like USA, UK, Germany, France, Singapore, Russia, New Zealand, Australia etc. as also several developing countries like Brazil, Thailand etc. have a per capita consumption of 35 to 50 kilos per person per year. The per capita consumption growth of sugar in India between 2000 and 2016 has been amongst the lowest in the world at around 1.25% per year, based on a simple average. This is despite a very impressive increase in income per person in the same period in India, which should have increased the sugar consumption at a much greater rate.

The Indian Council of Medical Research (ICMR), New Delhi, the apex body for the formulation, coordination and promotion of biomedical research, and one of the oldest medical research bodies in the world, funded by the Government of India through the Department of Health Research, Ministry of Health & Family Welfare, in January 2020, had undertaken a first of its kind survey on sugar intake in India, and concluded as follows:

· The intake of added sugar in metro cities in India was 19.5 grams per day., much lower to the level recommended by ICMR of 30 gram per day.(WHO’s recommendation is also much higher at 25 grams per day for a normal adult.)

As a part of this campaign, ISMA will be holding workshops & webinars, where experts like nutritionists, dieticians, endocrinologists, public health specialists, medical practitioners, sugar producers and consumers etc., will share their expertise, ideas and knowledge on the subject. The purpose of running such a campaign is to give the right information to the consumers in a single platform, in a world where there is lot of confusion, with many opinions and views of self-appointed experts.

As an important step in this direction, ISMA has prepared a Portal, which would be a single point window for right information and knowledge to be shared amongst consumers and to educate the general public about various facets of sugar. “Meetha” aims to be India’s foremost and leading website providing a plethora of educative information about the consumption, utilization and most importantly the value of natural sugar.

Mr. Sudhanshu Pandey, Secretary, Department of Food & PD, Government of India, launched ISMA’s “Knowledge Portal in a VC meeting on 28th Oct 2020, “called “meetha.org”. He congratulated ISMA for the important initiative taken to bust myths on sugar and spread the right awareness around sugar. He said that the problem with misinformation is that it travels faster. But people need to make an informed decision about food and nutrition. He said he comes from rural India, where there is cane juice, which is good for health. There are many such local food which needs promotion in alignment with the vision of the Hon’ble PM “vocal about local” He said in one of his trips to Kenya, at a hotel there was a huge queue where sugarcane juice was dispensed. This should also be replicated in India. And look at its commercialization, in which associations can play an important role. There is a need to advocate the message of positive acceptance of sugar in minds of consumers in regional languages. The portal should be developed in local regional languages so that narratives could be changed, and is more relevant in States like Maharashtra, UP etc. Also internationally there is a need to propagate this as well. It needs to be developed in some international language. He said that Meetha.org is a great initiative, which will help spread and educate the right knowledge and information to people”

Mr Vivek Pittie, President, ISMA earlier welcomed all attendees and briefed them about the purpose and objective behind the Portal launched today.

Joint Secretary (Sugar), Government of India too spoke about the importance to give correct information to people about sugar and bust all the myths on this. He said that the world per capita sugar consumption is about 22.5 kg, but India being the top sugar consumer, consumes about 19 kg of sugar only and this has remained static for the last two decades or so. There is negative perception around sugar which needs to be eliminated, since sugar has been part of our lives since times immemorial. He said that Meetha.org is excellent, and will spread correct and scientific based information to people. It will have doctors, nutritionists and other experts in their fields to provide their inputs on sugar subject, which will be helpful for us. He said in his opinion, sugar is not harmful to people, excess of anything is harmful.

The Portal launch was followed by a webinar to discuss about the myths surrounding sugar and to share ideas & views on responsible eating and healthy living. Experts in the field viz nutritionist, doctor and food chef spoke on the subject of sugar vis a vis artificial sugar with number of interested people attending the webinar from across the country.

Admin - Wednesday, 2 December 2020
According to the latest report of apex body Indian Sugar Mills Association (ISMA) The average ex – mill sugar prices in most of the...

GOI calls meeting with stakeholders to discuss measures to boost the Indian sugar...

Admin - Friday, 27 November 2020
In a meeting held on Thursday chaired by Union Commerce & Industry Minister Piyush Goyal stakeholders from the sugar industry shared their concerns and expectations from the Government of India.