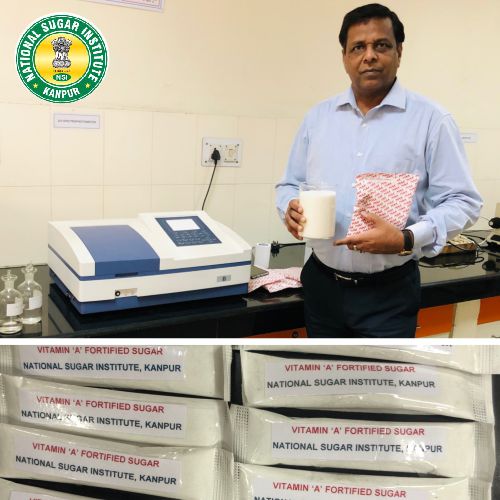 In many countries of Latin America and Africa, sugar has been selected as a vehicle for vitamin A fortification and efforts have been made to fortify the sugar. Although fortification of sugar with vitamin A is being carried out in many countries and efforts were made in India also for the same earlier, however, as the existing technology has certain drawbacks, the sugar fortification programme undertaken could not get the desired success. The technology in use involves preparation of sugar premix with huge concentration of vitamin A and then bulk mixing or blending with final sugar. Being a mixing-cum-coating phenomenon, the final sugar does not result in homogenous distribution of vitamin A and being a surface phenomenon, the shelf life of such sugar is also lower.

After studying the technology in use in some such countries like Kenya and Nigeria, a team of experts led by Prof Narendra Mohan, Director, National Sugar Institute (NSI), Kanpur has come out with an innovative process of fortification which involves co-crystallization of sugar with vitamin A. In the method, vitamin A (retinyl palmitate) is added to the sugar syrup and the crystallization is carried out under controlled conditions. During crystallization incorporation of vitamin A takes place directly into sugar crystal causing fairly uniform distribution and comparatively higher shelf life.

“We have been working on this project from the last three years through a dedicated research fellow, Anushka Agarwal and achieved the success on a laboratory scale. The sugar so produced has uniform vitamin A (15.5 – 19.5 µg retinol/g of sugar) with reasonably good shelf life of around 6 months. The additional cost of fortification of sugar may be around Rs. 2 – 2.5/- per kg on commercial scale. The institute has also filed a patent application for the process developed. Development of such sugar will not only provide a value-added product to the sugar industry but would also help in overcoming the vitamin A deficiency to a greater extent in the masses. We look forward fortification of sugar with other vitamins and iron etc., in the Sugar Technology division under the supervision of Shri Ashok Garg, Astt. Professor Sugar Technology.” said Prof Mohan.

“The results are consistent and have been validated by reputed outside analytical agencies.” said confident Anushka Agarwal.