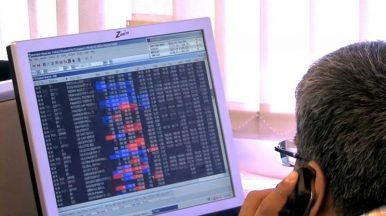 The gauge had lost 467.65 points in the previous session.

Investors turned cautious as trade war concerns between the US and China rose and a persistent weakness in the rupee became lingering concerns leading to volatility in the market, brokers said.

While, ITC, HUL, Hero MotoCorp, Kotak Bank, Tata Steel, Coal India, TCS and Bajaj Auto were among the top losers, falling up to 2 per cent.

Elsewhere in Asia, Hong Kong’s Hang Seng index dropped 0.04 per cent while Shanghai Composite gained 0.30 per cent in early trade. Japan’s Nikkei, too, was up 1.17 per cent.

However, the US Dow Jones Industrial Average ended 0.23 per cent lower on Monday.