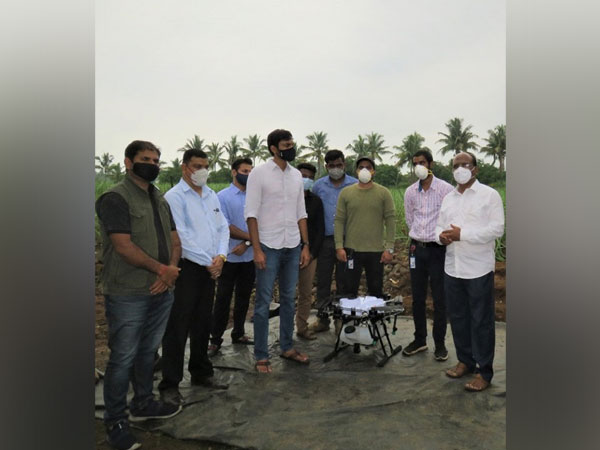 Sangli District has been grounds for pioneering agriculture and irrigation works in Western Maharashtra. From the cooperative movement to drip irrigation, innovation has been a sign of the cultivation in the region. The drone spraying technology introduced by Prateek Patil and adopted by the Rajarambapu Sugar Factory in Sangli in 2020-2021 has not only reduced time and efforts of the farmer but also increases profitability.

To launch this initiative, Prateek conducted 22 ‘Shetkari Parisamvads’ where he met over 4,900 farmers to incept the idea and talk about the benefits of this technology. According to him, “acceptance to new methods is often the most difficult step in the Indian agricultural landscape, and to get their willingness to try new schemes is one of the challenging parts.”

Prateek has been involved with agro-innovation and has conducted several initiatives to aid and propagate drip irrigation. These meetings across Sangli propelled the conversation and attracted many farmers to come and test out the drone technology.

Conventionally the farmer sprays his crops physically. Even with hired manual labour, this is a costly and time-consuming affair. In the manual spraying method, for 1-acre sugarcane, a farmer would spend around Rs1000 on spraying labour charges along with 200 litres of water and a higher quantity of chemicals.

To address these problems, coupled with the lack of labourers during COVID 19, Prateek decided to introduce this technique. He took it upon himself to test the technology and setup a partnership with a regional manufacturing company. The drones are given out on rent at very affordable rates saving almost 40% of total costs. It utilizes only 10 litres of water, saving almost 150 litres.

Additionally, now it takes only 5-10 mins to spray fertilizers and permitted pesticides on 1 acre of Sugarcane as opposed to 4-5 hours earlier. Crops at any height can be effectively reached and 4 nozzles guarantee a comprehensive and equal distribution of fertilizers and pesticides.

It is flexible across climate conditions and allows for uniform spraying of entire fields. A reduction of 25-50% in the quantity of fertilizers and pesticides used has been observed after adapting drone spraying and the quality of yield of crops has been found to increase by 20-30%, which in turn has translated to more income.

Use of this drone technology also has an additional advantage of generating employment for the local youth in sectors of manufacturing and operations. The Sugar Factory has partnered with a company called Chatak Innovations for assembling and operating the drones. Labour force hiring for the drone operation facility like Drone Pilots & Co-Pilots, Cars & Drivers for the drone’s transport and the supervision team is facilitated under the leadership of Prateek Patil. Employment numbers for assembling and operating is expected to increase as more farmers adopt the drone technology.

Currently, the Factory uses a 10 litre Octocopter drone. After conducting an initial pilot, this technology is being introduced on a greater scale to farmers of the region. Till date, more than 3,200 acres of area has been covered by drone spraying benefiting more than 2000 farmers of the region. Each drone is currently covering 9 to 12 acres in a day and this is a first of its kind exercise conducted by a sugar factory in Maharashtra, stated by Vikas Deshmukh (Director-Vasantdada Sugar Institute).

This initiative opens a great path into precision agriculture in Maharashtra, providing new ways for farmers to manage crops, ensure the efficiency of inputs such as water, fertilizers and maximize productivity, quality, and yield. As a part of Prateek Patil’s vision, there are plans for the Sugar Factory to further utilize drones for Crop Scouting.

This method gives a 97% accurate estimate of the Sugarcane crop’s yield. There are also plans to utilize drones to estimate pests and diseases in crops, conduct nutrient analysis of the soil by analyzing pictures of the crop, NDVI, monitor irrigation and also estimate the total area covered under Sugarcane in the region.